Baseball is an unforgiving sport. Seldom does a player follow a great performance with another. The law of averages is a real jerk on the diamond. Take Scooter Gennett, for example, and his magical four homer performance. That game (June 6th) was the first game he hit even one home run in since April 11th. He didn’t hit one single home run for the month of May. Then he went another two weeks without getting a round-tripper. The way baseball statistics typically go is this: one or two really good game usually means a slump is coming.

Today I’m talking about Reds legend Johnny Vander Meer. You have most likely heard of him as he is the only pitcher to ever throw back-to-back no-hitters. June 11, 1938, he threw a no-hitter against the Boston Braves. He then followed up by keeping the Brooklyn Dodgers from tallying a hit on June 15th, on the very first night game at Ebbets Field, no less. What’s funny about the two starts is that Johnny allowed as many walks as batters he struck out (11). Still a feat no one has reached, and it’s doubtful anyone will ever beat it.

Back in that day, pitchers pitched deeper into games. In fact, Johnny’s second no-hitter came on three days’ rest. In fact, he threw 16 complete games (baseball vernacular for he pitched every inning). By comparison, the league leader in complete games last season accumulated five.

Johnny Vander Meer, despite this historic feat, did not have a Hall of Fame career. A few years after getting two no-hitters in a row, he began having trouble with his control. He ended his career with 1,294 strikeouts and 1,132 walks. Some baseball historians account for Vander Meer’s lackluster career finish to his time served in the military as he joined up with the Navy in 1944 and 1945.

In all, Vander Meer finished his career with 131 complete games and 29 shutouts, all in Cincinnati. His best three seasons, ERA-wise, came in the three seasons leading up to him entering the Navy as he finished all three seasons under 3.00. He is also one of only four pitchers to lead the National League in strikeouts for three straight years (1941-1943), with the other three being Tim Lincecum, Randy Johnson, and Warren Spahn.

As far as personal accolades, Johnny went to four All Star games, all before he went in to the Navy. He pitched in the Reds World Series championship of 1940, albeit only one, three-inning appearance, as the 1940 season was when his control issues began to surface. Johnny was elected into the first Reds Hall of Fame class of 1958. 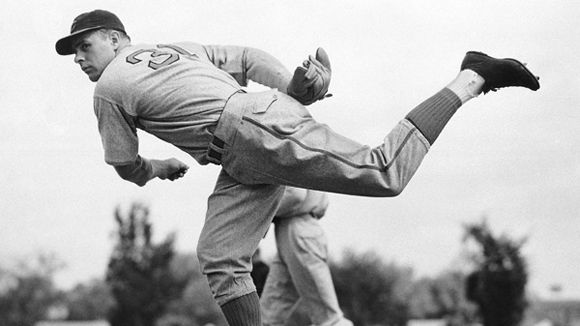 Look for more posts on the Reds historic players before the Big Red Machine as Spring Training rolls on to Opening Day!